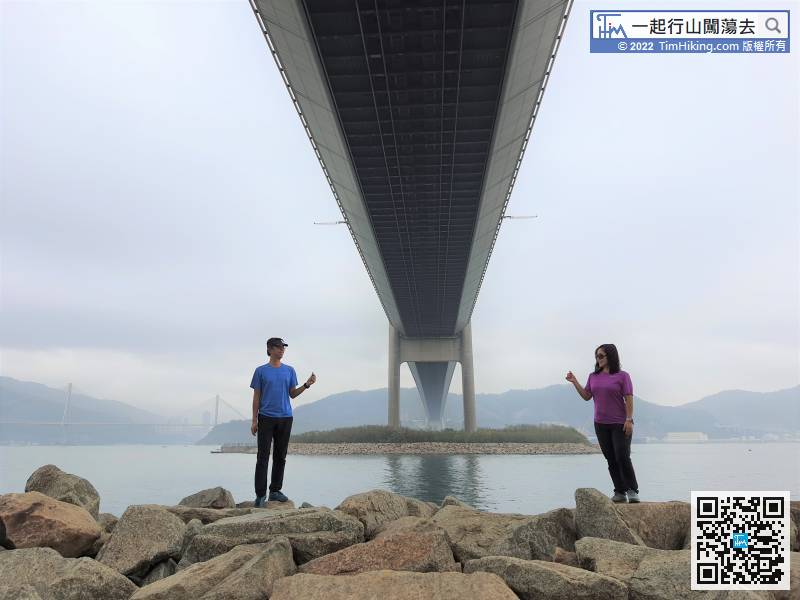 Ma Wan was named Tung Tsin Wan in ancient times. It was named because the small island resembling a copper coin. It is a small island between Tsing Yi and Lantau Island. It is also recorded in the Xin'an County Chronicles that 'Ma Wan' was called 'Mui Wai', which was one of the residences of Emperor Song Dynasty after he fled to Hong Kong. A stone stele with 'Mui Wai' can also be found near the west shore. And Tai Leng Tau is the highest mountain of Ma Wan, located in the south, but only 69 meters high. Located in Tai Leng Tau, overlooking the charming scenery of Tsing Ma Bridge. Ma Wan Fishermen Village, now known as Ma Wan Old Village, is located in the southwestern part of Ma Wan. It is a village full of fishing village flavour, with shacks near the shore. With the completion of the Tsing Ma Bridge, Ma Wan was heavily built and the fishing village faded away. Most of the original inhabitants have moved to the new village to the west, and now only one abandoned village house after another is left. Ma Wan Fishermen Village was originally planned for the second phase of Ma Wan Park, but as of 2019, only four remaining households have not moved out, and the construction has been delayed indefinitely. According to the latest news, the Ma Wan Fishermen Village was finally closed in April 2021, and the second phase of the project will also begin. Therefore, the Ma Wan Fishermen Village in the article can only be viewed as history.

The origin of Kowloon Customs can be counted to 1875. The unequal treaty Chefoo Convention signed by the Qing Dynasty and the British was probably related to the trade regulations and opium taxation. Later, in 1885, Tseng Chi Lse, the son of Tseng Guo Fang, signed the 'Special Article for the Renewal of the Chefoo Convention' with the British, which determined that each box of opium would be levied at a flat rate of about 110 taels and exempted from other taxes. The following year in 1886, China and Britain signed the 'Regulations for the Administration of Hong Kong Foreign Medicine Matters', also known as the 'Hong Kong Opium Agreement. ' The British set up a customs in Kowloon, named Kowloon Customs responsible for taxation, border patrol, and anti-smuggling. There are several tax factories under the jurisdiction of the Kowloon Customs, and the Kap Shui Mun Tax Factory is only one of them. It was completed in 1897. In the Ma Wan Fishermen Village, the Ma Wan Rural Committee was the location of the former Kap Shui Mun Tax Factory. There are two stone tablets outside, one with 'Kowloon Customs' and the other with 'Seven Feet of Land Borrowed at Kowloon Customs'. According to reports, there are a total of four Kowloon Customs stone steles, which are placed in the four corners of the tax factory, but only one remains, and the whereabouts of the others are unknown. As for the 'Seven Feet of Land Borrowed at Kowloon Customs', it was reported that the tax factory wanted to build a small road leading to North Bay in Ma Wan to facilitate anti-smuggling. At that time, the Kowloon Customs General Taxation Department borrowed land from the villagers to open the road, using the stone monument as the basis, and the road width was only seven feet. One year later, in 1898, the Qing Dynasty leased the New Territories to Britain for 99 years. The Sino-British border was moved to the Shenzhen River, and the tax factory was closed immediately.

Whence then cometh wisdom? and where is the place of understanding?